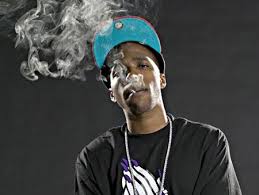 Note: In an effort to counteract what Amp subjected you to earlier today (that Joomane shit), I thought it would be a good idea to resurrect an old post from the blog. Although Curren$y and Joomane share few things in common – they look a little slow and they are proficient at getting money – its what they choose to do with the money that speaks volumes. I’ll just say that being Coogi’s sole customer in 2011 is a ridiculous thing. Anyway, you can call this”looks like he’s retarded rap.” Still, it beats Lupe’s “recycling bin rap.” Enjoy.

Curren$y started out with No Limit records, but I first heard him once he moved over to Cash Money around 2005- 2006.  I remember downloading Lil’ Wayne’s Dedication 1 in order to hear Wayne’s alleged improvement from wack “wobbledy wobbledy” rapper to legit rhyme spitter. For me, however, Curren$y ended up stealing the show, as his verses, solo tracks, and hooks on the 28 track project (Wayne was very generous with the features) caught my attention. In fact, I flat out thought then (and still do now) that Curren$y was the superior rapper.

Eventually, Curren$y struck out on his own; He formed one crew (Fly Society), then another (J.E.T.S.), dropped a million songs (where you can clearly hear his growth/artistic development), became a cult favorite, and is now a fairly popular rapper with his own niche in the game.  Without running the risk of sounding pedantic, one could say that his work has gotten a more insular and abstract over time.  Curiously, he also doesn’t seem to aim for the traditional rap success signifiers anymore— probably because he’s too damned high.

Anyway, consider this random collection of songs an introduction for novices attempting to track Curren$y’s career up til now, or call it some of my favorite tracks. This is far from exhaustive, but if you’re interested in hearing more, go do your own fucking research, you lazy runt!

Or, if ask nicely in the comments, maybe I’ll consider it… [secret – I won’t].

Where Da Cash At featuring Lil’ Wayne & Remy Ma (originally heard on Wayne’s Dedication 2) – alleged single for what was to be Curren$y’s debut album with Young Money.

Animal Freestyle (off the Independence Day mixtape) – Curren$y’s first post-Cash Money mixtape.  This track serves as a bit of a manifesto for his next moves.

Mandatory (off Super Tecmo Bowl) – A freestyle over an old Duck Down beat (Buck ‘Em Down Remix) and one of the first tracks where his focus starts shifting to Weed and your Woman.

The Only Thing That Matters featuring Street Wiz – I forget where this is from, but it’s definitely from his Terry Kennedy/Fly Society era.  Most of that stuff is forgettable.

Let’s Get It Crackin’ featuring Nate Dogg and Nijay – Origins unknown, but he was clearly aiming for the charts on this.  Not a bad effort, but nothing like the guy we know now.  I’m guessing it’s a Cash Money-era throwaway.  He even talks about not smoking that much.  Riiiiight…

Lost In Transit – Also off Fear and Loathing; this track seems to hint at his shift towards more abstract beats.

Car Service (off How Fly with Wiz Khalifa) – a joint mixtape with his fellow stoner.  This is one of the highlights off that project and the beginning of what is probably going to be a long artistic link between the two of them.

Tokyo Drift (off Jet Files) – Another really cool/weird beat.  I think it was done by Big Chop– a name I think I recognize from the Cash Money-era.  That’s a lot of thinking. Jet Files dropped after his first independent/digital solo project, This Is Not A Mixtape. SN: I lost my copy of This Is Not A Mixtape and I bought that shit too.  Fucking computers…

Smash On O’Leary (off Smokee Robinson) – At this point, the weedhead was in full effect.  This mixtape was sort of a tie-in to coincide the Saints making the Super Bowl.  At this point, He sort of quit dropping mixtapes at a prodigious rate, so this was a one off project.

Glass House with Big KRIT and Wiz Khalifa (off Kush & OJ & KRIT Wuz Here) – A really good collaboration that introduced me to Big KRIT, another recent favorite of mine. Might be my favorite track from 2010.

King Kong (off Pilot Talk) – The first single. Produced by Ski Beatz. Probably the culmination of his shift towards more abstract work.

Ova n Out with Trademark Da Skydiver (off Issue 2: Supervillain) – Trademark is one of the J.E.T.S..  He probably has a more conventional style than Curren$y, but they talk about the same shit and work well together. Besides, what better way to end a tape than with a song titled “Over and Out?”