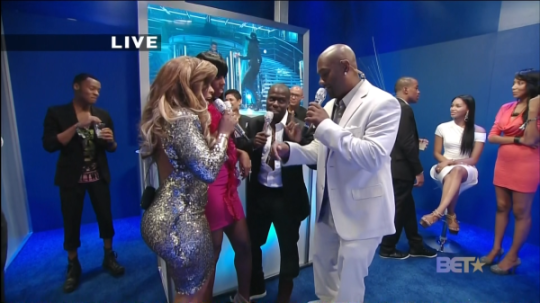 Look, if you didn’t watch the BET Awards show last night, theres really only three things you need to know:

1. Twitter makes black people acting like idiots SO much funnier. That shit reminded me of the old c-section, expect 140 characters forces your FUNNY to its maximum level’s, lest you get ignored.

2. #Freeass was the #1 MOST TALKED ABOUT object WORLDWIDE—> Dat Ass had bitches hating on weaves, trying to find marks on her legs, and shitting on her age… Lets get serious, Heffers, if you ain’t #Twipicing your own Cakes (c)@big545 , DON’T HATE ON OTHERS. Get your flabby ass in the gym and respect the jux.

3. I was reminded WHY I never watch these shows– The performances are ALWAYS ass (save a couple– *daps to Jill Scott*), nobody with any common sense (or working ear drums) seems to pick the winners (note: I ain’t actually LISTENED to terrestrial radio in YEARS, so I don’t know who’s “hot” in the streets right now, but Travis Porter’s “Go Shawty Go” still gets regular spins for the sheer niggernessness (c)me), and as usual, the treatment of those who this thing of ours has lost gets marginalized and shunted to the side while ministral shows like that bullshit Gospel fest (seriously EBT? (c)@lilkim), recognizing the achievements of Steve Harvey, and of course, Kevin Hart spending more time on my screen laughing at his own jokes than ACTUALLY BEING FUNNY.

Seriously, my personal enjoyment derived from watching so many black people FAIL despite their best intentions. What an awful show…

Thank God/Allah/Odin/Zeus/Whoever for the tailor who was able to sit that wedding cake into the back of Free’s Dress, tho. Sheesh.

Comments on: "A Coontastic Series of Events: BET Awards" (24)